Airports are the main structures that your planes fly from. Each airport is tied to a particular city and can be advertised and upgraded to enhance business in that city.

The size of a city impacts the airport build cost, the number of jobs that will be available when the jobs list refreshes, and the number of people or cargo units that can be in layover at any time at an airport. City sizes range from 0.0M to 10.0M people.

Airports are divided into three sizes based on the population of the underlying city. In the "Airport Info" screen these are referred to as "Class 1", "Class 2", and "Class 3". The Class of an airport indictates what planes can fly into it. A Class 1 airport (

) airports allow all planes to land. You cannot change an airport's Class.

Airports can be upgraded to add more jobs & layover slots for a certain cost. All airports start at "Upgrade 1" and can be upgraded further using coins. Upgrading an airport will not change the airport's Class.

Airports can be advertised for a certain cost to increase demand in that city for 8 hours. This will, of course, bring more people to that airport.

There are 3 main formulae for airports: Opening Cost, Upgrade Cost, and Closing Value. (NB: In game, populations are given in millions to 2 decimal places, whereas the formula requires the 3 decimal places)

The closing value calculation comes out to half of the total you've spent on the airport: (Opening cost + Upgrades) / 2. 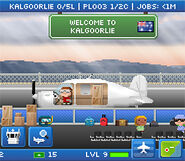 Brisbane Airport with a Navigator-C docked.

A X10 Mapple Pro at the Nuuk Airport.

An X10 Mapple Pro in Calgary.

A Kringle Kruiser in Seattle.

A Sequoia-M in Tokyo.
Add a photo to this gallery
Trending pages